The Yeshiva creates a mature, open and honest spiritual language

Learning Torah is an engagement, a dialogue, between the student and the Torah, Hashem and himself

Yeshivat Siach-Yitzhak, situated on the northern hill of Efrat, is a Yeshivat Hesder where students combine army service with advanced Torah Study in a five year program. The Yeshiva was founded in September 1996 by Rav Shagar (Shimon Gershon Rosenberg) ZT”L and Rav Yair Dreifuss who have served as the Co-Roshei Yeshiva.
The Yeshiva also attracts a significant number of older students, mainly Hesder graduates, who have found their niche in the Siach-Yitzhak’s unique atmosphere.
The name, Siach, gives expression to the Yeshiva’s ardent interest in promoting dialogue between the Torah world and its social, cultural, and religious milieu. In January 2004, the name “Yitzhak” was added, in memory of the late Rabbi Dr. Yitzhak Breuer ZT”L, a prominent rabbinical figure in Germany and Eretz Israel in the early 1900s. Rabbi Dr. Breuer was a philosopher and jurisprudence, and aspired to shape a religious Jewish character for the future Jewish State. This is his vision of “Torah Im Derech Eretz Israel”, which is an outgrowth of the weltanschauung of his grandfather, Rabbi Samson Rephael Hirsch Zt”l “Torah Im Derech Eretz”.
In May 1999, at the behest of Rabbi Shlomo Riskin, Chief Rabbi of Efrat, and the local City Council headed by Mr. Yinon Achiman, the Yeshiva moved from its original location in Bayit Vegan, Jerusalem, to the northern hill of Efrat – Givat Ha’dagan. The hill, which is within Efrat’s municipal jurisdiction, is a strategic location as it overlooks Bethlehem and Solomon’s Pools and borders areas now controlled by the Palastinian Authority. 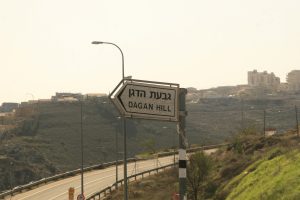 Serving as the temporary Yeshiva campus, the caravan site at Givat Hadagan includes a Beit Midrash, classrooms, offices, dorms for the unmarried yeshiva students, and housing for families of married yeshiva students and graduates. Plans are underway to construct a permanent campus on the Givah in the year 2017.

Today, some 80 students, both single and married, learn in the Yeshiva and Kollel. Over half the Siach-Yitzhak students are enrolled in the Hesder program and some are currently performing their active service in the Israel Defense Forces.
Some of the students combine Torah learning with studies in “The Herzog Teacher’s College” where they may continue learning towards a Bachelor’s Degree in Education after they finish the five-year Hesder program.

Yeshivat Siach-Yitzhak undertakes to promote dialogue with the community-at-large and has developed a close relationship with the Kehilot, schools, and Ba’alei Batim in Efrat.
The Yeshiva also organizes Irvei Iyun, special evenings of study, for the general public, especially in Jerusalem.
Inspired by Rabbi Breuer’s vision, the Yeshiva has founded the “Binah Le’itim” Torah Institute, which explores Torah issues that have ramifications for Israeli society and the Jewish nation. In 2005 the Institute published its first book, “Vayikra Et Shmam Adam” (And He Named Them Adam), a collection of Torah articles concerning the Jewish family in our modern (and post-modern) day and age. The second book in the series, “Shenei Ha’Meorot” (The Two Great Lightings), was published in December 2006 and deals with woman’s equality in the family from a new Jewish point of view. Both books are based on studies of sugiyot in Ketubot and Kidushin which were conducted by the Institute’s researchers’.

In 2014 the Yeshiva founded the ‘Tzerufim’ leadership program. the program allows individuals of 24 years of age or older,  with spirit and drive, to grow spiritually, personally and in their learning into being community leaders. The aim of the program is for its graduates who have spent two years of learning and joint work on personal growth, will develop a broad and contemporary spiritual lexicon, will develop and refine tools and abilities of leadership so that they can go on to lead communities in the future. This ‘Leadership’ can manifest in many fields such as education and Halakhic psak, in the arts, culture, and other endeavors - social, economic and so on. To learn more about the program, visit it’s homepage.

In addition to the works mentioned above, the Yeshiva publishesd Rav Shagar’s talks and Drashot, and other literary works. To date, over 10 books have made their debut, and the Yeshiva plans to publish additional works in the future.

In the year 2007, our beloved Rosh Yeshiva, Rav Shagar, was diagnosed with a grave illness and after months of suffering past away on the 25th of Sivan 5767 (11.6.07), leaving us orphaned, as “Sheep Without A Sheppard”.